What are Freshwater Angelfish Varieties?

The term silver angelfish and wild type angelfish are other common names for the scalare angelfish (Pterophyllum scalare) species found in the fish trade that have their natural coloring. 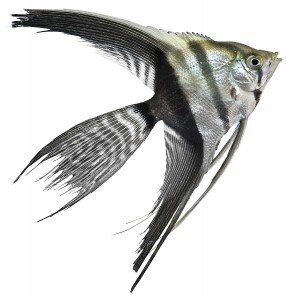 Scalare angelfish that were caught in the wild, or have wild-caught parents or grandparents are referred to as wild or wild type angelfish. Their body is not the silver you are probably used to. Its ranges in hue from gold to green to blue. Wild angels have exactly three body stripes, one passing through the eye, one down the midline of the body, and one that extends from the dorsal to the ventral fin.

Once bred in captivity, wild types usually produce the silver angelfish with black stripes you are more familiar with. Unless you get angels from wild stock, you’re unlikely to see a true wild type at your local fish store.

According to The Angelfish Society, “The term “silver” describes an angelfish which contains all wild type genes (no mutations) however was not caught in the wild and is considered domestic.” The silver angelfish is naturally silver with three thick black stripes and closely resembles the natural coloring of the scalare angelfish found in the wild.

What’s a Variety of Angelfish Then?

A variety of angelfish, such as the marbled, black, or koi, has been bred to bring out genetic mutations, or traits, that produce desirable colorings and tail lengths. When a genetic mutation appears, such as an extra stripe or marbled black spots, you have a variety. It’s not a new species or even a breed.

This entry was posted in Angelfish Breeding. Bookmark the permalink.