Although it may seem out of place in the cichlid family due to its shape, other characteristics such as fin position, jaw arrangement, and scale characteristics clearly make it a cichlid. Like most cichlids, the three angelfish species have a single nostril opening, elastic jaws that can create negative pressure and suck prey towards the fish, and a second internal jaw called the pharyngeal jaw with teeth used for chewing while the outer jaw captures more prey. 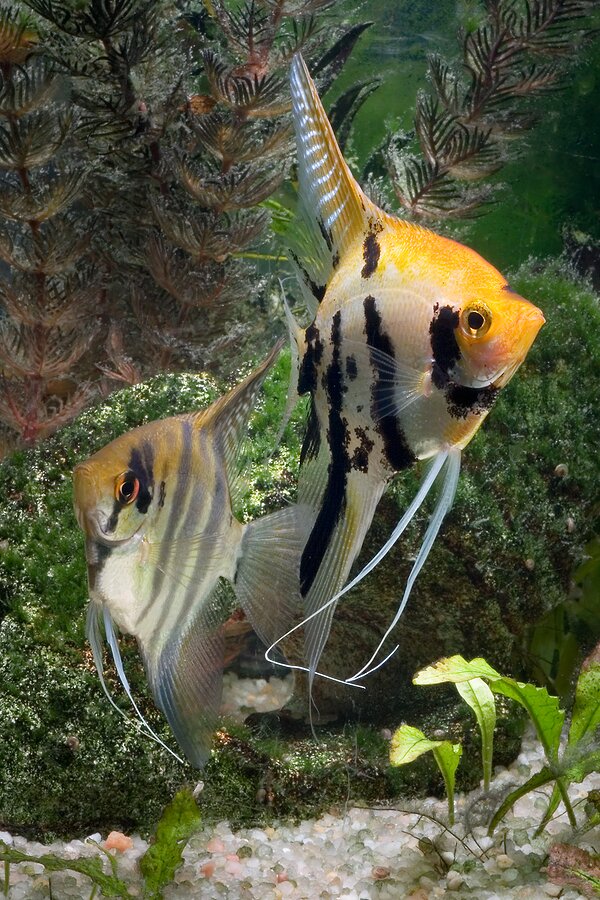 Length: up to 6 inches
Height: up to 12 inches, but usually not more than 10 inches tall

This is the most common of the angels found in aquariums and the species that typically goes by the simple common name of “angelfish”. They may also be referred to as scalare angelfish or freshwater angelfish. Full grown, they measure about 4 to 6 inches from the nose to the base of the tail, and up to 12 inches in vertical length. Their natural coloring is a silver body with vertical black stripes. However, many scalare angelfish color varieties are found in the aquarium hobby. Even in the wild, their coloring can vary depending on where they live and their diet.

They are found in much of the Amazon River basin from Peru to where the river meets the Atlantic Ocean in Brazil reports 500 Freshwater Aquarium Fish. They can also be found in the many tributaries of the Amazon more northern parts of South America. They are an adaptable species and found in most water types from blackwater to clearwater and often with dense vegetation.

Their natural waters range from a pH of 6.0 to 8.0 and a water hardness of 5.0 to 13.0 dH (soft to hard). Temperatures range from 74 to 86 degrees F. These values will fluctuate by season. Those fluctuations can trigger breeding in angelfish. 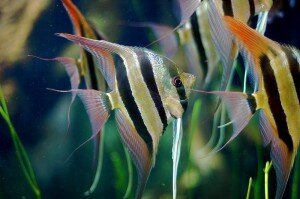 angelfish are distinguished from the scarlare by their longer dorsal and anal fins and seemingly massive size. These angelfish do have the triangular body shape, but their noses are slightly turned up and appear taller and straighter then the scalare angelfish. They can grow to approximately 8 inches long. They are not as well known as the scalare angelfish and rarely found in stores. This because they are a challenging fish to keep and rarely breed in aquariums. When wild-caught, they seem to do best in the aquariums that have the same water conditions as their native river. Without knowing which river an altum angelfish comes from, it can be difficult to provide them with the best environment.

Altum angelfish have much more limited natural range than the scalare. Found in the Orinoco river basin in Venezuela south to the Negro and Amazon river basin in Brazil.

Depending on which river they come from, the natural waters of the altum range in pH from 4.2 to 6.2 with a water hardness of 1 to 5 dH (very soft to soft). The temperature ranges from 80 to 88 degrees F. 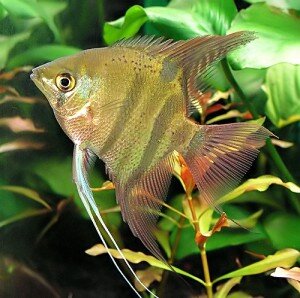 Length: up to 2 inches
Height: up to 5 inches

Also called the teardrop angelfish, dwarf angelfish, and long nose angelfish, this is the smallest of the Pterophyllum angelfish species. They have the angelfish shape and similar coloring, but short dorsal and anal fins. They only grow to a maximum of five vertical inches. Their nose to the tip of the vertical fins is somewhat curved and they have a downward curved nose, which gives them a unique look that some find less attractive than the other anglefish, while others find endearing. The Leopold angelfish is the most rarely found of the freshwater angelfish species. They are also the most aggressive angelfish.

Their native range is limited to rivers of Guyana and south to the Amazon basin of Brazil.

Pterophyllum dumerilii and the Case of the Mystery “Rare” Angelfish

You may come across mention of the dumerilii angelfish, or even encounter a fish dealer trying to sell such a “rare” angelfish. However, there is no species with the name of Pterophyllum dumerilii. The name comes from part of the original scientific species name given to scalare angels of Plataxoides dumerilii in 1855. Scalare angels were renamed Pterophyllum scalare in the 1960s and the dumerilii name was never used for any other angelfish species. So if you see a dumerilii angelfish for sale, take a close look to identify the true species.

Now you may still find angelfish that just do not quite resemble the scalare, altum, or Leopold’s. These are usually wild caught angelfish. There’s speculation among aquarists if these are unidentified species of angelfish or the true wild scalare angelfish. After over 100 years in the pet trade, freshwater scalare angelfish do not quite resemble their wild ancestors. There are also hybrid angelfish from the crossbreeding of the different species in aquariums. In the case of a hybrid angelfish, you may truly have a mystery angelfish.