Raising water temperature is considered a valid treatment to remove parasites and fungus from infected fish. However, increasing temperature for bacterial or viral diseases will cause the bacteria and virus to flourish. Therefore, it is important to know the difference so as to know how to treat the angelfish and not cause harm.

fish. Some swear by the treatment, while others say to avoid it completely. Some fish, like angelfish and discus, like warmer water, and aren’t distressed by the 4 to 6 degree Fahrenheit temperature increase to treat ailments. But other fish in the tank may not survive such a temperature increase. Raising temperatures is often recommended when using other treatments such as salt or commercial medication. 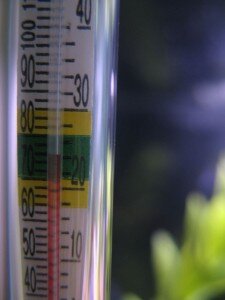 How to Increase the Water Temperature for Angelfish Disease Treatment

Identify the disease. Before adjusting the water

temperature as a means to treat angelfish disease, you much first identify the cause of the symptoms in your fish. Increasing the water temperature may worsen some conditions. Only try this treatment if you can confirm that you have a parasitic or fungal infection. Do not raise the water temperature for bacterial or viral diseases.

Increase the aeration in the tank. Warmer water temperatures decrease oxygen in the water. Some medications also decrease the amount of oxygen in water. Since this gives fish less air to breathe, add an air stone, lower the water level, or both. Lowering the water level gives more splashes and agitation when the filter return water goes into the tank. More surface agitation of the water increases the amount of oxygen in the water. Adjust the return to a higher volume if the filter has an adjustable return.

Ich is possibly the most commonly fish ailment associated with increasing temperatures to cure. Ich, also called white spot because of the white spots on the fish is a common parasite that attaches itself to fish. Attached to fish, it looks like salt. Loaches and other smooth skinned fish are the first attacked by the parasite. Any fish that has ich attached will eventually die unless treated.

Raising the tank temperature will kill the ick when in the free swimming stage and speeds up the parasite’s lifecycle. Ich can’t be killed while it is attached to the fish. It feeds on the fish, before releasing itself to reproduce. Higher temperatures cause the ich to release from the fish and become free floating sooner, where it can be treated and killed. Medicines or salt treatments are most effective at this time. It is recommended to keep the temperature elevated for 3 days after the last sign of the parasite.

Other Parasites and Fungus

Saprolegina and Achlya, velvet disease, also known as gold dust disease, fish lice, Costia are fungus and parasites where raising the tank temperature is recommended in addition to other treatment.


When Not to Increase the Tank Water Temperature

As with all medication, read and follow the instructions on the container. Follow instructions in regards to raising or lowering temperatures. Be aware that both medications and higher temperatures can reduce oxygen content in the water.

Also, many of these diseases in fish are signs that the fish are living in poor water conditions. Improving your tank care will prevent most of these conditions from becoming life threatening to our fish.

A few of the better books for learning more about this topic are The Manual of Fish Health and Aquariology , Breeding & Raising Angelfishes, by Ed Standsbury, Tetra and a TFH book, Discus Health.